The Power of a Strong Feasibility Study

It was a pleasure to welcome Pellissippi State Community College President Dr. L. Anthony Wise and Convergent Partner Joe April to our podcast, The Difference. We discussed the college’s recently completed (and very successful!) capital campaign and the difference it made having an experienced nonprofit fundraising consultant conduct a strong feasibility study prior to that campaign. The feasibility study helped Pellissippi State shift its campaign strategy and ultimately drive it forward.

The partnership between a consultant and the nonprofit organization needing the feasibility study is important. It must be built on mutual respect and trust to ensure that the nonprofit will be well-represented in the community and the consultant’s findings will be taken seriously. In developing the questions for the study, it is extremely helpful to have an industry expert on board as your consultant, not just a fundraising expert.

As Joe noted on the podcast, “It is easy to collaborate with people who share your vision and passion, in this case for the community college system. Dr. Wise struck me immediately as someone who was student-centric and clearly understands and is passionate about the community college mission just as I am.”

When conversations started between Joe and Dr. Wise around Pellissippi State’s “Inspire. Invest. Impact.” feasibility study three years ago, Dr. Wise and his team were planning only a capital campaign. Two buildings on two different school campuses in two different counties. Both projects were absolutely needed, but Joe and the Pellissippi State Community College leadership team expected to have some challenges in fundraising that the feasibility study would uncover.

In particular, they thought they would get feedback from community stakeholders regarding another large education endeavor. The college was part of the scholarship effort that had evolved into the Tennessee Promise, a last-dollar program ensuring that every student in the state had the opportunity to attend Pellissippi State (and other state schools) tuition free.

Many major potential investors in the community college’s capital campaign would also be supporters of the Tennessee Promise. It was expected that they would want to know why they were being asked to provide additional support to the college when they already support this statewide initiative.

What Joe discovered through the feasibility study was much more.

Listening to what your community has to say

Joe’s interviews did prove first of all that the capital projects unique to each county should be focused on with a geographic intent. The Math & Science Building at the Hardin Valley Campus was most important to those in that surrounding area, and academics were the priority for these investors. They wanted to hear about the school’s connectivity with four-year universities and transfer statistics.

For those in Blount County where the Workforce Development Building would be built, workforce demand was extremely high. They responded best to details on how Pellissippi State would be partnering with the industries in the area to affect economic development in the future.

Overarching, however, in the feasibility study interviews was the deep desire for everyone to play an active role in students’ lives by removing financial barriers. The entire community – in both areas – wanted to ensure that every student who wanted an education would have an opportunity to get one.

“There are a lot of things beyond tuition that are barriers to students – the cost of transportation, the cost of textbooks, the cost of childcare,” said Dr. Wise. “In the feasibility study interviews, Joe found that there were many people who wanted to help remove these. They wanted this direct connection to students. We created a Student Opportunity Fund as a result and made it a major part of our campaign. The chair of our campaign made the first gift to this Fund and helped us establish it. It was representative of what we learned in the study but also representative of what we believed at the college.”

In all strong feasibility studies, according to Joe, you have one foot in the community and one foot in the nonprofit who needs the study. The consultant is the go-between. The Pellissippi State Community College fundraising feasibility study was an obvious example of “the passion of the organization’s leadership connecting shoulder-to-shoulder with the desires of the community.”

The message from the community was loud and clear: support for the two priority capital projects was there but how could they support students as well?

When Joe noted to campaign and school leadership the consistent theme he was hearing from stakeholders, he was met with open minds and an entrepreneurial approach. “A good study is almost grassroots and can be a mini-movement within itself to create positive change,” Joe said.

The college leadership team decided in the end to do it all! They redesigned their case for support and created the Student Opportunity Fund as an additional element to the campaign. This was a brave thing to do when there were daunting capital projects that needed funding. But our feasibility study results were well represented by a strong consultant and did not fall on deaf ears because of mission-minded leadership. 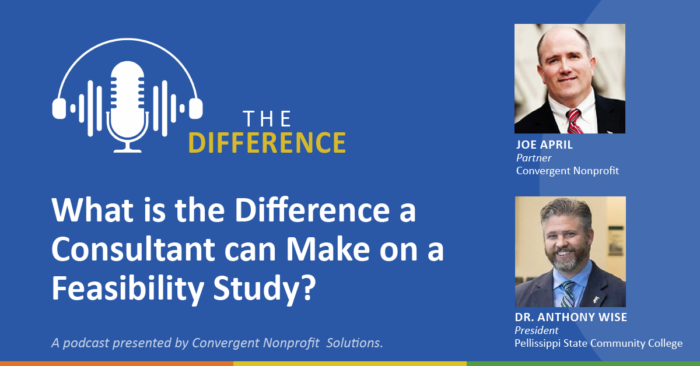 Thanks for reading a few of the highlights of my podcast episode with Dr. Wise and Joe April. Please listen to the entire episode, The Difference a Consultant can Make on a Feasibility Study, to hear more details and the fantastic end result from this exciting capital campaign.

Kristin has worked with national and local nonprofits in her path to Convergent. She works closely with our project directors and principals to provide strategic marketing and brand guidance.